Paraná Pesquisas: most Brazilians aprove the gambling after to know advantages of legalization

After becoming aware of the advantages, the position regarding the legalization of all games of chance was 58.0% in favor. In addition, 56.8% of interwiees were favorable legalization as an alternative source for paying emergency aid during the Covid-19 pandemic.

The legalization of gambling will return to the Judiciary and Legislative agenda. The Judiciary will address the issue through the judgment by the Supreme Federal Court of Extraordinary Appeal (RE) 966.177, with recognized general repercussion (Theme 924). The merit judgment of RE 966.177, which will be judged April 7, was filed by the Public Ministry of Rio Grande do Sul against the judgment of the Criminal Appeals Panel of that State, wich understood the criminalization of the conduct of gambling would not find validity in current constitutional order.

In Legislative, Senator Angelo Coronel (PSD-BA) should present in April his report as a substitute for PLS 2648/19 in the Senate’s Committee on Regional Development and Tourism – CDR. The proposal by Senator Roberto Rocha (PSDB-MA) legalizes casinos in installed resorts, but the rapporteur defends legalization of all modalities in preview of his report.

Hired by the news portal BNLData, in partnership with the Brazilian Institute for Legal Gaming – IJL, Paraná Pesquisa consulted 2,086 Brazilians through telephone interviews between March 15th to 19th to get to know the national public opinion about the legalization of gambling. The representative sample of Brazil reaches a 95% confidence level for an estimated error margin of approximately 2% for the overall results.

The search was conducted with objective of consulting population about the legalization of gambling, such as casinos, “jogo do bicho”, bingo, video games (slot machines) and online games, by the National Congress.

Majority is favorable of legalization gambling 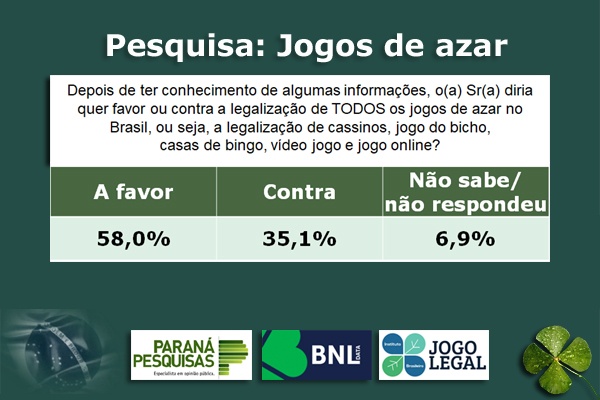 Paraná Pesquisa presented interviewees the economic advantages of legalization gambling such as job creation, increased tax collection and gains from grants for the implementation of gaming houses. After taking note of this information, the interviewees’ position regarding the legalization of all games of chance in Brazil was 58.0% in favor, 35.1% against and 6.9% don’t know / didn’t answer. Men (65.4%) with secondary education (61.4%), economically active population (60.2%) in the North / Central West Region (61.3%) were the most favorable the legalization of all modalities.

The only modality registered disapproval from the population – with little difference – was the legalization of casinos. Despite the slight disapproval bias, the numbers show that society is divided, especially if we consider the margin of error of 2%: 46.1% are against the return of casinos, 45.5% in favor and 8.4% don’t know / didn’t answer. Women are more resistant legalization of casinos. Only 35.4% of them are favorable this modality. Unlike men, whose majority approves the return: 56.9% want the casinos to return. Regarding education, 53% of respondents with higher education are favorable.

Indifferent as to the location of casinos 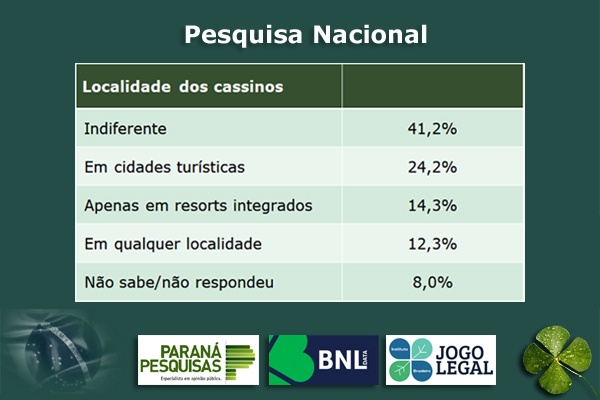 The survey also consulted where casinos should be installed, if they were legalized. Most are indifferent to the locations where the casinos would be installed for 41.2% interviewees, for 24.2% they should be located in tourist cities, for 14.3% only in integrated resorts, 12.3% in any location and 8% don’t know / didn’t answer. Indifferent as to the location of the casinos.

In another research conducted out in May 2019 by ‘Paraná Pesquisa’ with federal deputies, it indicated at that time that 52.1% of parliamentarians were in favor of legalizing all modalities, with only 7.2% having a preference for casinos’ only in integrated resorts’. In other words, another survey topple myths about preference for legalization of casinos in integrated resorts.

Paraná Pesquisas also asked if the interviewees believed “jogo do bicho” was related to criminality. For 53.4% the activity is not related and 46.6% answered yes. The survey of those who believe crime could increase or decrease with the legalization “jogo do bicho” indicated that 43.5% believe it will decrease, 25.2% it will increase and 31.3% don’t know / didn’t answer. 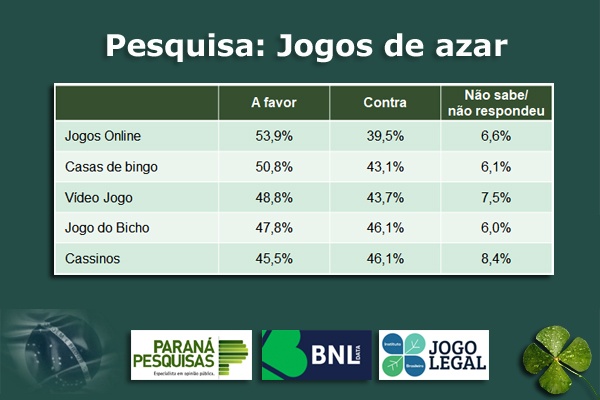 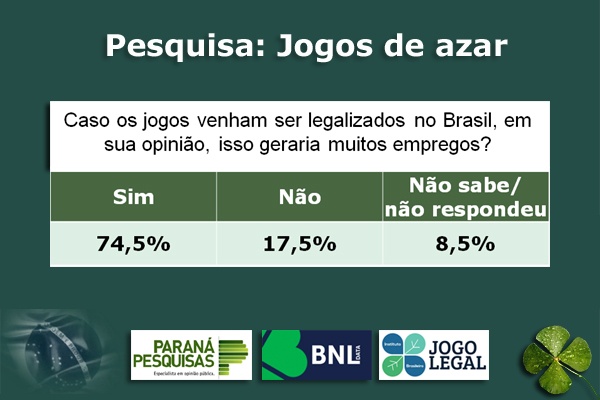 Emergency aid during the Covid-19 pandemic 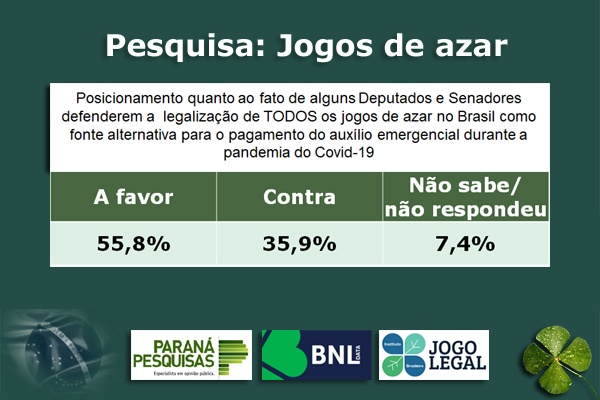 The survey also consulted interviewees about the fact some deputies and senators advocated the legalization of gambling in Brazil as an alternative source for paying emergency aid during the Covid-19 pandemic. Again, the majority interviewees with 56.8% are favorable initiative, 35.9% are against it and 7.4% don’t know / didn’t answer. Again, men (61.4%) aged 16 to 24 years (62.0%), with higher education (59.8%), economically active population (58.4%) in the North / Central West Region (60.0%) are those who most believe this possibility.

The following we present the results of public opinion survey carried out in Brazil with the objective of consulting population on the legalization of gambling.

The universe this research covers the Brazilian population. To conduct this research, a sample of 2086 inhabitants was used, which was stratified according to sex, age group, education, economic level and geographical position. The data collection work was done through telephone personal interviews with inhabitants aged 16 or over in 26 States and the Federal District and in 194 Brazilian municipalities from March 15 to 19, 2021, 20.0% of the interviews were audited simultaneously with their realization.

The sample is representative residents of the areas surveyed and was selected in two stages. In the first stage, a probabilistic draw was carried out for the municipalities where the interviews were conducted using the PPT (Probability Proportional to Size) method, considering the population aged 16 or over in the municipalities as basis for this selection. In the second stage, the selection of interviewees within municipality was made using proportional sample quotas, according to the following variables: gender, age group, education and economic level.